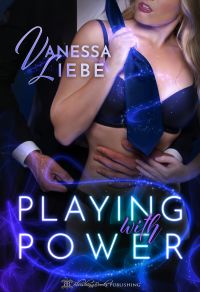 Playing with power can land a girl in all sorts of trouble with her man, as
six ladies soon discover. Whether she’s a witch who disobeys the no-magic
rule, a fairy making lust cakes, an amateur sorceress casting a spell on
her boyfriend, a victim of an enchanted necklace, a revenge fairy messing
with a deity, or a pleasure fairy abusing her abilities…

Once they’ve experienced the sensual consequences of playing with their
magical powers, can these ladies find their happily for now with a hint of
forever? Or have they spoiled their chances?
Excerpts for Mature Audience

From ‘Breaking the Rules’

Fuck he was big. Built like a bear. Caia narrowed her eyes through her sunglasses at the man who stood leaning against a wall, arms folded, across the swimming pool from her. Yes— built like a bear—because he was a fricking werebear. She could smell the testosterone from here and promptly shivered in distaste. Who wanted one of those alpha beings pawing at them? And just what the hell was his problem? He was staring at her. In fact, he had been for a while. She’d felt someone’s eyes on her over several occasions in the past few days, but when she’d turned to look, she hadn’t caught anyone. Had it been him?

Caia shifted on her lounger. At least the big brute couldn’t tell whether she was returning his stare or not because of her shades. The last thing she wanted was for him to think she was interested. He could take his weird fixation somewhere else. Caia didn’t do werebears. She only did well-hung humans every once in a while. And only for one night to fuel her magic, then she wiped their memories. That way there were no messy emotions involved.

Giving the were freak a final look of disgust, Caia leaned back against her lounger, then closed her eyes. To enjoy the glorious sunshine.

Caia sighed. “I didn’t order a drink.” She didn’t even bother looking up at the waiter.

“A gentleman bought it for you.”

What the fuck? Caia hadn’t started flirting with any men today to obtain a free drink. “I think you have the wrong lady,” she said with growing annoyance.

“No. The beautiful lady in the tiny pink bikini. That’s you.”

It was indeed. Caia opened her eyes, whipped off her shades and glared at the waiter. “Which gentleman?” Yet, before the man turned to look, she knew it was going to be that damn werebear. Sure enough, the waiter pointed him out. Incensed at having her sunbathing interrupted, Caia shoved her shades back on and resumed her position. “Tell him not to bother me again. If he does I shall shove the glass where the sun don’t shine.”

The man made a noise of discomfort. If she didn’t know better, she would say he was scared. “But, madam. Mr. Blackwood is the owner of this resort. I can’t take the drink back.”

Caia hesitated. It wouldn’t be fair to get a hireling into trouble. “Very well.” She took the drink from the tray. “Thank you.” She waited until the waiter walked away before she tipped the drink into a nearby flower pot. There. Problem solved. No way was she accepting a drink from a werebear, owner or not. He might have drugged it. She glanced across at him again, and couldn’t help feeling a little nervous at the look on his face before he turned away and disappeared into the club house. It had promised retribution. Perhaps she had been unwise to piss the owner of this gorgeous resort off. She really liked it here and would hate to have to find somewhere else. But the bear had to learn to take no for an answer and Caia didn’t like backing down.

Shaking her head at how ridiculous she was being, she lay back and closed her eyes once more. She was a powerful witch for fuck’s sake. Well, she was when her magic was fully charged. Still, low on magic or not, she smiled at the thought of turning the werebear into something if he tried anything again with her. Then she determinedly forgot all about him as she soaked up the gorgeous feeling of the hot sun on her skin.

The witch was playing with fire, refusing his drink. Tariq had seen her, decided he wanted her and that was that. She would be his. No female could ever turn him down. And yet, this witch had dared to glare at him—he had felt it from across the pool. She had tipped his drink away too. What woman did that? Her defiance and indifference challenged him. Made him want her all the more. As if her lush body barely constrained in that skimpy bikini hadn’t made him hard enough.

Tariq smiled as he walked into his office, his anger of a few moments ago turning into anticipation of the hunt. If the witch thought she could deny him, she was wrong. He would inform her of the club rules and once she broke them, Tariq would take great delight in teaching her the consequences of doing so.

Soon, the beautiful redhead would be submitting to his inner beast. He doubted she’d ever experienced sex with a half-vampire, half werebear like him before. And although Tariq had sensed her disdain about his werebear half, he was confident that the witch would soon change her mind. Immune she was not. Emotion of any kind hinted at passion and he looked forward to unleashing that passion. Taming the wild beauty was not his intention. Far from it. But she would be solely his. For he also wanted her as his vampire mate.

Jasmine was about to turn and leave her cubicle, but she hadn’t noticed her sexy boss watching from his office doorway and then silently approach her. She jumped when he laid a hand on her shoulder from behind and drawled in her ear, “A moment in my office, if you please, Miss Sheridan, and bring the cupcakes with you.”

Jasmine froze in shock, but her nipples tightened at the sound of his deep voice and the heat from his hand branded her skin through her thin silk blouse. She closed her eyes. This couldn’t be happening. Now the lust spell was in full force she just wanted to escape the office. She certainly didn’t want to risk eating one of her own cupcakes and neither did she want her gorgeous hunk of a boss to eat one. She hadn’t intended for him to have one. “Erm, can’t it wait until Monday morning, Mr. Rolfson?” She turned to face him and gasped when he didn’t step back. “I really have to get home.”

Goodness, he was breath-taking up close and his deep blue eyes looked at her shrewdly. “I’m afraid not. I must insist you come with me.” Jasmine found herself putting her bag down, picking up the remaining cupcakes and following him into his office. “After you,” he said, standing in the doorway to let her through, before closing the door behind him. Jasmine gulped at the sound of the door clicking shut and tried not to be so aware of him, but his powerful presence seemed to fill the room and he aroused intense lust in her without having to eat one of her stupid cakes.

“Will this take long, Mr. Rolfson?” She was a bit nervous as to why he wanted to see her and walked over to his desk to move away from him.

“That rather depends on you.”

She frowned at his enigmatic answer and watched him walk into the room and sit on his desk near her. “Please take a seat, Miss Sheridan, and put the cupcakes down.”

Jasmine put the cupcakes down on the desk beside him, catching a whiff of spicy male cologne as she did so before sitting down in a chair facing him. She immediately realised her mistake because she had to look up at him and it made her feel vulnerable. “What seems to be the problem?” She bit her lower lip as she stared into his handsome face.

Mr. Rolfson looked down at the cupcakes and then at her. “Well, the problem seems to be your lovely cupcakes, Miss Sheridan. They do indeed look delicious, but they seem to be having a strange effect on the whole office, wouldn’t you say?”

Squirming under his close scrutiny, Jasmine blinked several times but she decided to try to brazen it out. After all, he couldn’t know what she was. “I’m not sure what you mean, Mr. Rolfson. My cupcakes are gluten free and low in calories. They shouldn’t be triggering any allergies.” Why was she so breathless? She licked her lips nervously and felt heat suffuse her body when his incredible eyes were drawn to the action and darkened with desire. Did he want her? Please let him want her. She felt another stirring of lust.

“You know we’re not talking about allergies.” And the admonishing tone he used made her panties wet.

“No, Miss Sheridan, we’re not.” He smiled at her. “We’re talking about how all of my employees are currently fucking each other senseless after eating one of your cupcakes. I’m sure you couldn’t help but notice.”

Jasmine felt her pussy clench and her nipples harden at how he said ‘fuck’ in that sexy way, as though he wanted to do the same to her. “That’s ridiculous, Mr. Rolfson. Cupcakes can’t have that effect on someone.” She flicked back her long hair. “Now, if there isn’t anything else, I wish to go home.”

His blue eyes looked intently at her. “Stay where you are,” he warned her and she gulped. “Cupcakes can have that effect if you’re a mischief fairy and have put a lust spell on them.”

Jasmine gasped and her green eyes widened in horror. “How do you know that?” Then she cursed herself for blurting that out without thinking.

Mr. Rolfson laughed, and she watched in stunned silence as a glow of gold appeared around his irises. “I know exactly what you are because I’m a vampire. I can sense other non-humans, especially fae.”

She stood up abruptly, her heart thumping wildly. Jasmine was a little bit frightened of him now. As a fairy, she had powers, but as a vampire he was easily more powerful. She looked in dismay at this gorgeous man built like a Greek god and wondered why she hadn’t seen it before. He was too perfect to be human.